The Lounge What is on Your Mind? Debugging Our Computer Science Trivia Feature
# 15

Added a 120 second timeout for each question after it loads.

120 seconds seems like a long time, as I notice most people (like me) click "next" and answer within 10 to 30 seconds, and often faster; so 120 seconds seems fair for everyone; but we can change it of course.

Top 40 by number of questions per user (hashed for guests):

The current average rate of the new trivia questions being answered since the inception of the my new computer science trivia code (now 5.4 days since launched) is:

This User Gave Thanks to Neo For This Post:
vbe
# 17

We have received only one bug report so far, which was related I believe to a JSON formatting / Javascript error due to some characters in the database which did not play well with JSON and Javascript. I wrote and testing a lot of code to filter out the potential gotchas when a new question was submitted to the DB and manually cleaned unprintable chars and line breaks from the questions. The results are that the error seems to have gone away and I have not seen it again.

So far so good. Currently, here are the user interactions:

The first and last entries by users:

Translating to 9854 / 6305 or about one user answer submitted every 1.4 minutes (minutes/question) since I released this new code was released.

Over the past 24 hours, the number is higher:

Translating to about 1 question per minute answered on average over the past 24 hours.

The total number of questions in the DB is:

The vast majority of these questions (maybe 99%+) were derived from Computer Science textbooks or Wikipedia.

As far as countries, here are the top 40 (Neo, excluded):

and based on hash (masked), IP addresses:

Basically, this is going very well and seems to be running close to as bug and error free as one could expect after slightly less than one week after coding it and releasing it to the public.

The greatest percentage of those who answer questions are guests, not registered users:


So, 90% of the users who use this new feature are not registered users, which is exactly what I expected and hoped for.

As far as the average score to date for all these users (sans Neo):

and for only registered users (sans Neo):

Neo does not count, since I entered all the questions and also click randomly for testing, but just for fun:

856... that is a lot of testing... but I play our trivia when I am at the gym and resting and just hanging out killing time, LOL... which means I should be playing trivia less and working out more.

So, that's about it. I will use these kinds of mysql queries to create some scoreboards and leadership boards later; but I'm months behind of my annual tax filing paper work due to some problem with my bill paying service back in the US; and need to get back to solving this problem before the tax man gets mad at me for being behind on my annual paperwork!

Believe, me I would much rather prefer to be writing Vue.js code and creating some scoreboards than doing tax paperwork; but alas, life is not always fun and coding!

As far as registered members who submitted answers so far (sans Neo):

Join Date: Sep 2000
Last Activity: 26 March 2021, 8:55 AM EDT
Location: Asia Pacific, Cyberspace, in the Dark Dystopia
Posts: 19,115
Thanks Given: 2,351
Thanked 3,358 Times in 1,877 Posts
Even though I should be working on non-forum things this week, I did put together some quick draft of a stats module for the trivia, which is not complete and currently only visible to Neo:

For registered members only.

For guests, is TBD. 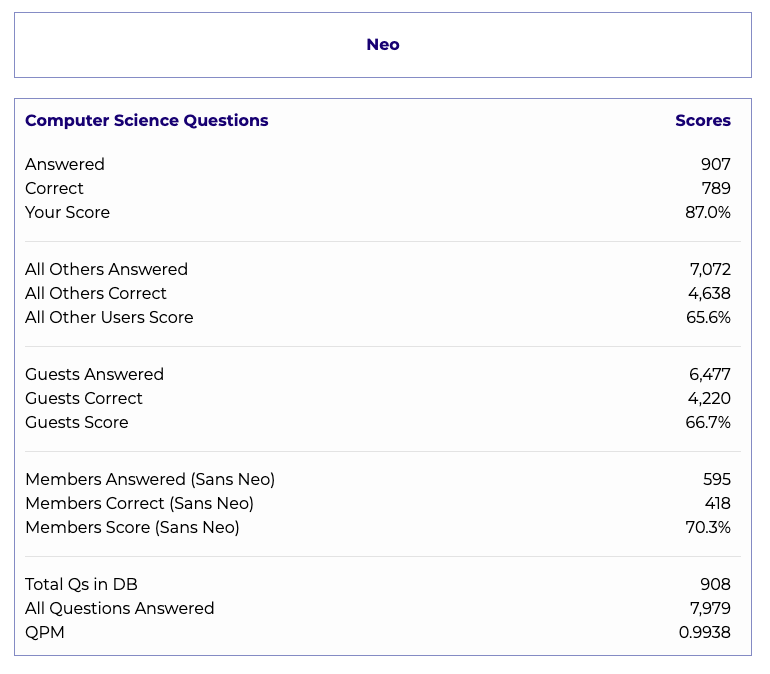 Just noticed that our successful computer trivia feature (stats here) has surpassed over 50,000 questions answered by users: https://www.unix.com/trivia_stats.php This was a coding effort worth while and I'm pleased to see so many people enjoying it in such a short time since it was released... (3 Replies)

Thanks to Akshay, who helped me write the core MySQL queries, we now have two new draft leaderboards, by (1) member and by (2) country: https://www.unix.com/trivia_stats.php Currently milhan leads the members with a high score of 90%: ... (3 Replies)

The UNIX and Linux Forums now has over 1000 TRUE / FALSE computer science and computer related trivia question in our database. These questions are of relatively high quality (compared to similar sites on the web) and are fun (according to feedback by users). In the first week during the... (1 Reply)

I have added a new experimental "Computer Science and Mathematics Trivia - True or False" section in the discussions, currently under the tags box. In the future, I plan to Expand this feature to add more trivia categories from math, science and technology. Keep track of correct and... (20 Replies)

Is Web Development is a part of computer science ?

I am now a student in university in 2nd year. I am studying computer science. But I am not sure what type of jobs computer science provide. I know some of them are software programming or network management. Recently, I hear some about Web Development. I wonder if it is a part of computer... (3 Replies)

Is Web Development is a part of computer science ?

I am now a student in university in 2nd year. I am studying computer science. But I am not sure what type of jobs computer science provide. I know some of them are software programming or network management. Recently, I hear some about Web Development. I wonder if it is a part of computer science.... (1 Reply)

Hi, I haven't posted on the forums for a while now, I tried to find the most appropriate section for this post, but if this is in the wrong section please forgive me. First, let me say I'm a sophomore in HS. I know that job wise I definitely want to do something in computers. A while ago I was... (5 Replies)