Congrats to Nezabudka for her Formulator Badge (UserCP Prototype v0.40)

The Lounge What is on Your Mind? Congrats to Nezabudka for her Formulator Badge (UserCP Prototype v0.40)
# 1

Join Date: Sep 2000
Last Activity: 5 June 2020, 10:28 AM EDT
Location: Asia Pacific, Cyberspace, in the Dark Dystopia
Posts: 19,109
Thanks Given: 2,351
Thanked 3,358 Times in 1,877 Posts
Congrats to Nezabudka for her Formulator Badge (UserCP Prototype v0.40)
Please join me in thanking one of our most active new members, nezabudka, who suggested that we start using the new usercp prototype and change the menu items around, effectively "promoting" the new prototype CP.

At first, I did not understand her suggestion, but after 'coming down" from days of crashing against some Vue.js quirk, I reread her suggestions, interpreted them, and then I implemented her suggestions today in version 0.40, basically moving the top UserCP items in the dropdown menu in the main navbar to the new CP prototype. It was not as easy as one might think, because Vue. js wanted to convert the links to Vue SPA routes; but I found the bug and a workaround and it's working OK (or so it seems to be but I'm sure someone will find some bugs, LOL.. if so, please post back if you do... )

Here is the plan, illustrated below, basically replacing the links in the current UserCP menu with the single link to the new prototype CP: 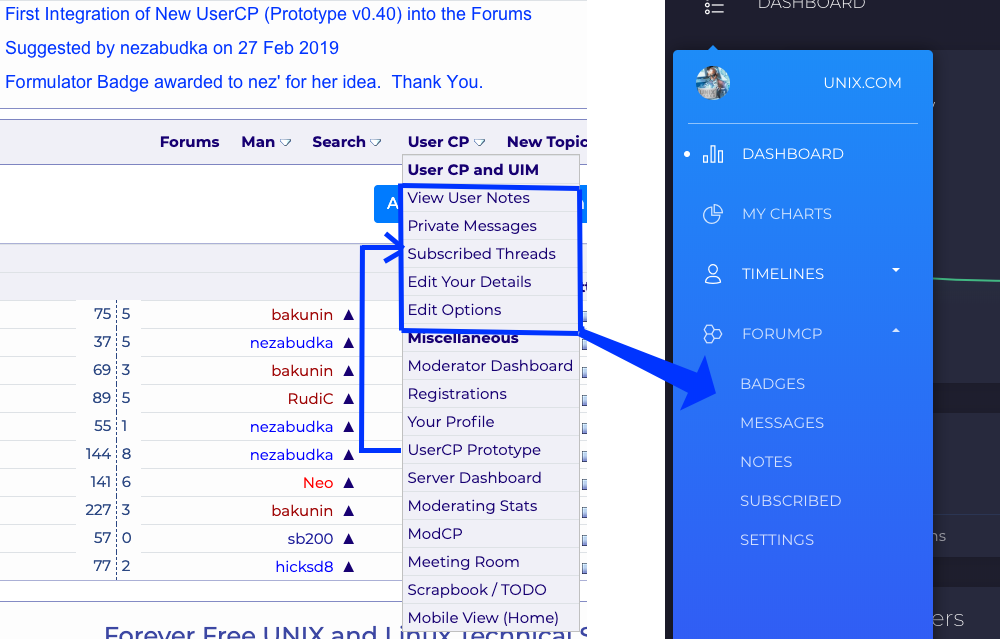 This was a great suggestion, and it was so obvious, that I completely missed it, and so nezabudka has earned her first Formulator Badges for the great idea.

I guess nezabudka liked the progress on the new usercp prototype, and wanted to promote it and use it, so I followed her suggestion. 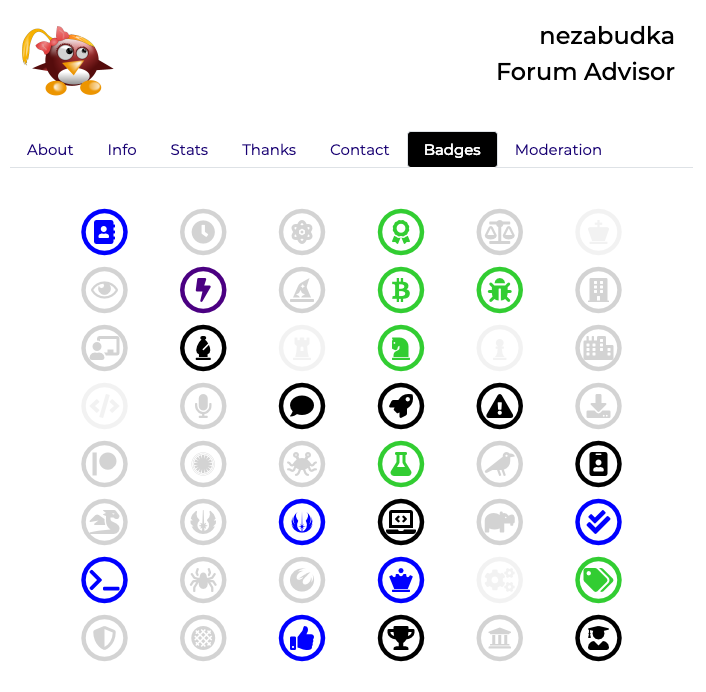 Join Date: Nov 2018
Last Activity: 8 May 2020, 10:17 AM EDT
Location: undefined
Posts: 489
Thanks Given: 382
Thanked 285 Times in 215 Posts
Thank all for having such a great site. When I learn English, I will write a bunch of thanks to everyone who makes it a lively and modern place to communicate. I am glad that my proposal turned out to be useful. Actually, I'm not very attentive, and next time I can offer such garbage

These 3 Users Gave Thanks to nezabudka For This Post:
000vikas Neo RavinderSingh13

Regarding the latest version of the UserCP prototype (version 0.63) I have made a lot of major changes, including Added a "Posts Timeline" table for the recent posts, complimenting the non-table version earlier, which has been moved off the main menu (link at the bottom of the table). Added a... (4 Replies)

My Charts in the Prototype Vue.js UserCP

Yea.... something I thought would take me an hour ended up taking most of the day. Well, it's not like those YT video tutorials where it take a week or more to make a video and the guys (gals) make it look so easy. But having said that, I'm happy to share with forum members the first "My... (6 Replies)

i definitely want to thank and congratulate zazzybob on becoming a moderator in record time.. ZazzyBob you definitely have skills and hopefully they will continue to grow and spread... thanx for helping me out all those times moxxx68 (1 Reply)

I guess this is the most appropriate section for this post... Just wanted to give a big congrats to LivinFree for passing the 1000 post mark. Nice job! (2 Replies)

Hi Neo & All first I'd like to congratulate you for the nice impressing and promissing service. I'm waiting for new forums , like: Advanced Unix / Sun / Linux / Xwindows / CDE . obiously not all question should be at the Unix for Dummies forum! Keep up the good work, Hezki (1 Reply)