Join Date: Sep 2000
Last Activity: 15 July 2022, 8:51 AM EDT
Location: Asia Pacific, Cyberspace, in the Dark Dystopia
Posts: 19,118
Thanks Given: 2,351
Thanked 3,359 Times in 1,878 Posts
Nearly Random, Uncorrelated Server Load Average Spikes
I have been wrangling with a small problem on a Ubuntu server which runs a LAMP application. 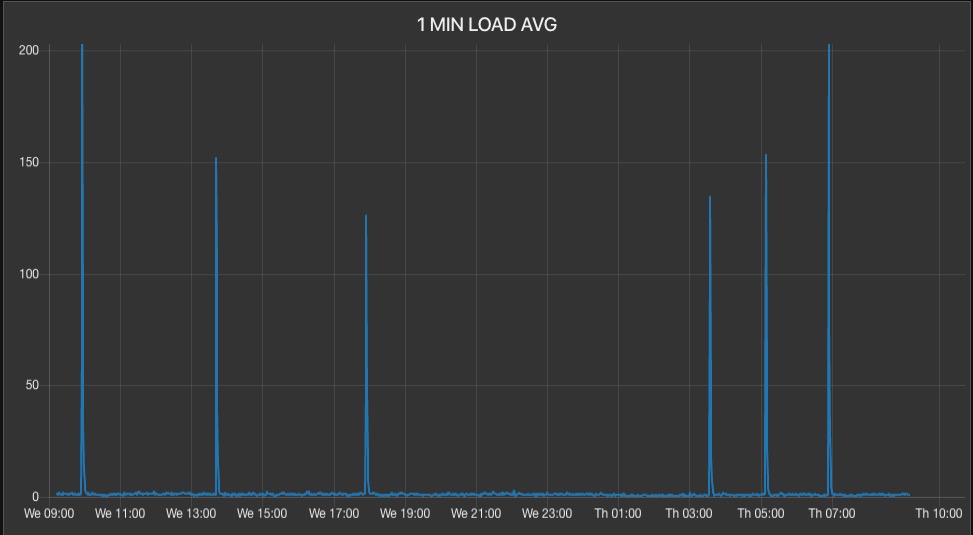 Join Date: Sep 2005
Last Activity: 10 February 2021, 3:50 AM EST
Location: Switzerland - GE
Posts: 6,876
Thanks Given: 594
Thanked 694 Times in 627 Posts
I have seen cases like that when you have enormous disc cache synchronising... all is fine when pure transactional mode ( the periodic sync has hmmm "little" to update ) but when it comes to batches running, it fills the cache before periodic sync and then the system has to wait the end of forced sync (file cache OS side...)
Other contention possible big file cache with big SGA: parsing both and not finding reduces perfs...
Last edited by vbe; 02-13-2020 at 04:07 AM..
This User Gave Thanks to vbe For This Post:
Neo
# 5