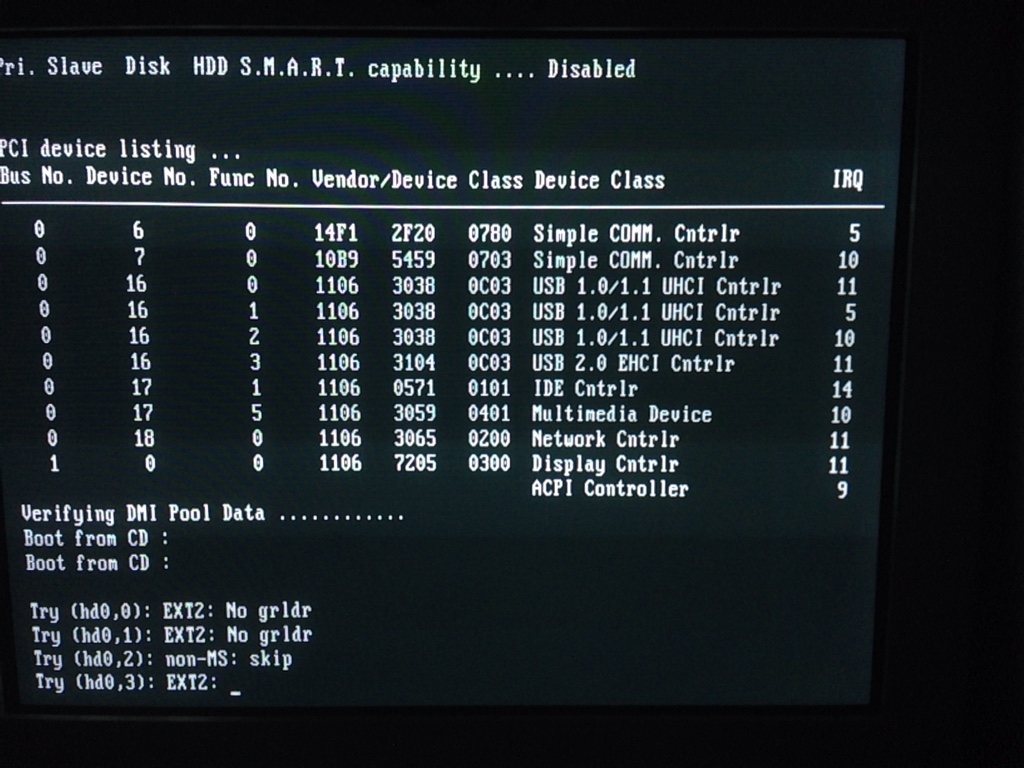 I have created a personally made SUSE-based distro using susestudio.com and it will install just fine on my laptops (32-bit Acer Aspire One ZG5 and MacBook 4,1). However, when installing on an old Emachine desktop, I get the following error seen in the image. It has two hard drives with the largest one split as /boot (ext2), / (ext4), Linux-swap, and /home (ext4). I used to have Puppy Linux hard installed just fine (I know; unconventional), with grub working. It essentially just hangs on that screen with an unresponsive keyboard. Is there a fix or missing packages I should add to my build to avoid this? The machine doesn't have a lot of RAM, but I did the install via IceWM and Yast through the terminal and walked away. I came back with what looked like the typical restart after an install. I thought this was kind of odd since graphically it asks questions regarding grub and no automatic restart on the other computers.

Join Date: Aug 2005
Last Activity: 9 December 2019, 3:02 PM EST
Location: Saskatchewan
Posts: 23,310
Thanks Given: 1,331
Thanked 4,623 Times in 4,217 Posts
My first suspicion on it freezing, given old hardware, is graphical incompatibility. Make sure GRUB isn't trying to do anything with a fancy boot overlay screen or anything, just a basic raw text one.
# 3

Join Date: Aug 2015
Last Activity: 19 November 2016, 9:19 AM EST
Posts: 11
Thanks Given: 0
Thanked 2 Times in 2 Posts
Personal SUSE build installation issues.
All suse-branding packages were removed before building and the grub menu is text only. For some reason, it just doesn't show up. It may be the partition formats. I just don't understand why it freezes on hd0,3 (should be /home partition). Also, the ext2 formats it is saying isn't correct. I may have to just not journal anything and try again. At least it just skipped over the Linux swap partition.

Quote:
Originally Posted by TheOuterLinux
I wiped the whole hard drive and split it into 4 parts for different flags. I'm trying again now.


Almost got done with the installation, but the caps lock and scroll lock lights started blinking for a few minutes and the computer restarted itself without any prompts.

hello All, good day to you. could you tell me is there any way I can download SUSE lunux enterprise server trail version ? I want to install sap application over it. thanks in advance. (1 Reply)

hi guys right now I have 6 Virtual Machines (VMs) running on Vmware ESXi 5.1 and attached to Storage SAN. All these run Suse Linux 11 SP1 x64. All of a sudden 1 of these VMs is running very slow making high CPU usage and I see al wait % kinda high 40-50%. Apparently since I don't own this... (5 Replies)

I am installing RHEL6 on a Cisco UCS blade and the GUI isn't showing up. Curious!!!!! I have installed it on 5 of the other blades and the GUI is there. However, there are many issues that I am having and I am going crazy with this thing. I have issues where the network adapters are not showing... (1 Reply)

Hello, I have a project that I have compiled on a number of linux systems including CentOS, Ubuntu, and Windows Cygwin. I am trying to build the project under SUSE 12.1. The make file runs allot of the way through, but then throws an error that an included file can't be opened. This is the... (4 Replies)

I am trying to build a software on HP-UX (HP-UX 11.00). It links against Xerces and Xalan libraries (amongst others). I am getting the following errors during the final linking phase. Can somebody help me understand the problem? I compiled Xerces and Xalan using aCC ( as recommended) while... (1 Reply)

Hi all, Previously I had both opensuse 11.3 and Windows XP SP2 on my PC, there was no problem at all.I was able to access all documents in Windows from opensuse. Now when I wanted to install solaris 10 on the same machine there were 2 problems ... 1. Windows is not accessible from solaris... (3 Replies)

i'm following the, "How to setup and secure Snort, MySQL and Acid on FreeBSD 4.6 Release" off of the snort.org website. in the documentation it says snort should be installed through the following: ----- make -DWITH_MYSQL -DWITH_FLEXRESP ; make install ----- later it says to do the... (13 Replies)