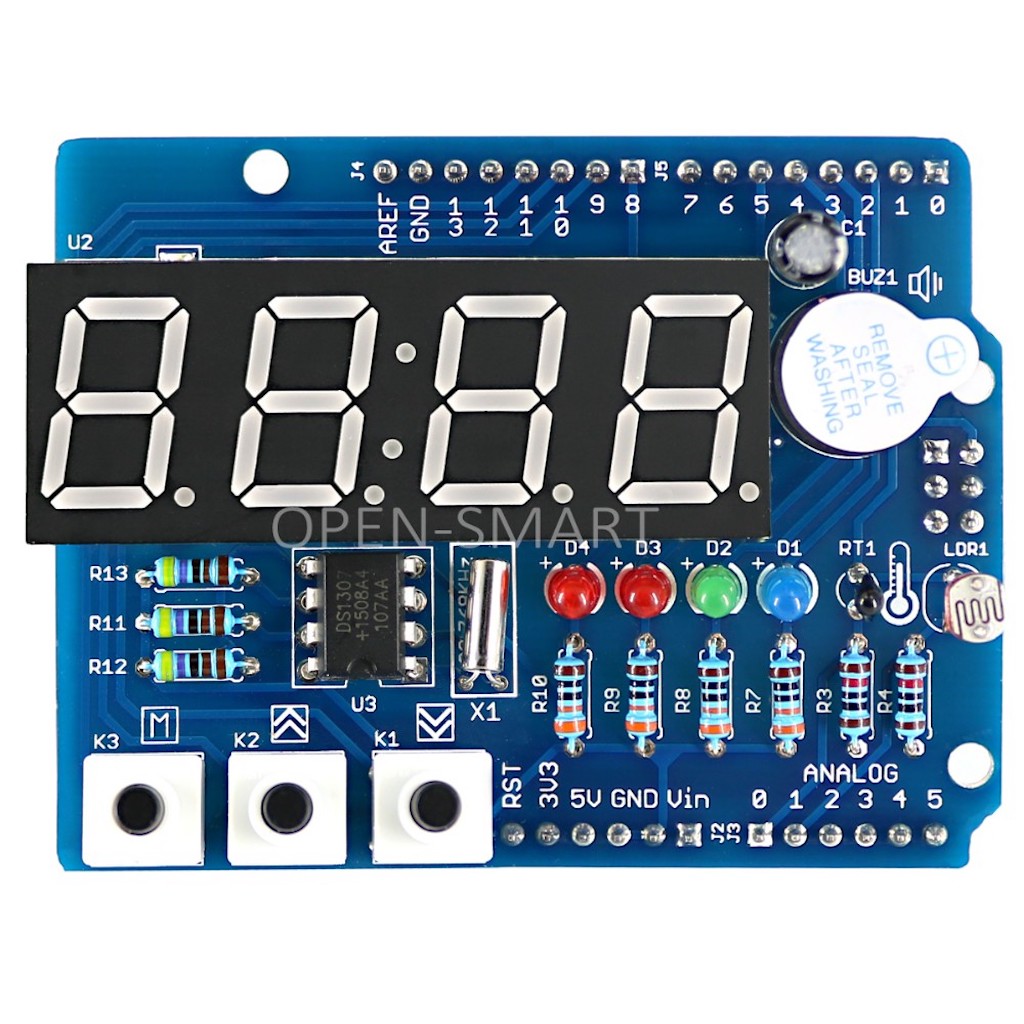 This board is a lot of fun for a few bucks. It has a low grade Real Time Clock that runs on a little coin battery, a low grade light sensor and a low grade thermistor. In this context "low grade", means that the components are mostly for fun and educational purposes, but they are not accurate enough to use for most practical applications. This is especially true for the DS1307 RTC, which runs a bit fast, gaining second(s) every hours, and minutes by the day. In addition, the thermistor (the MF52E103F) is not very accurate, even when I calibrate is using the Steinhart-Hart Equation for calibrating thermistors (more on that in a later post) so, at least so far, I cannot get accurate temperature measures, even after re-rewriting the thermistor code (off by about 2 degrees Celsius, give or take). The light sensor is also a bit dodgy, but it works OK. 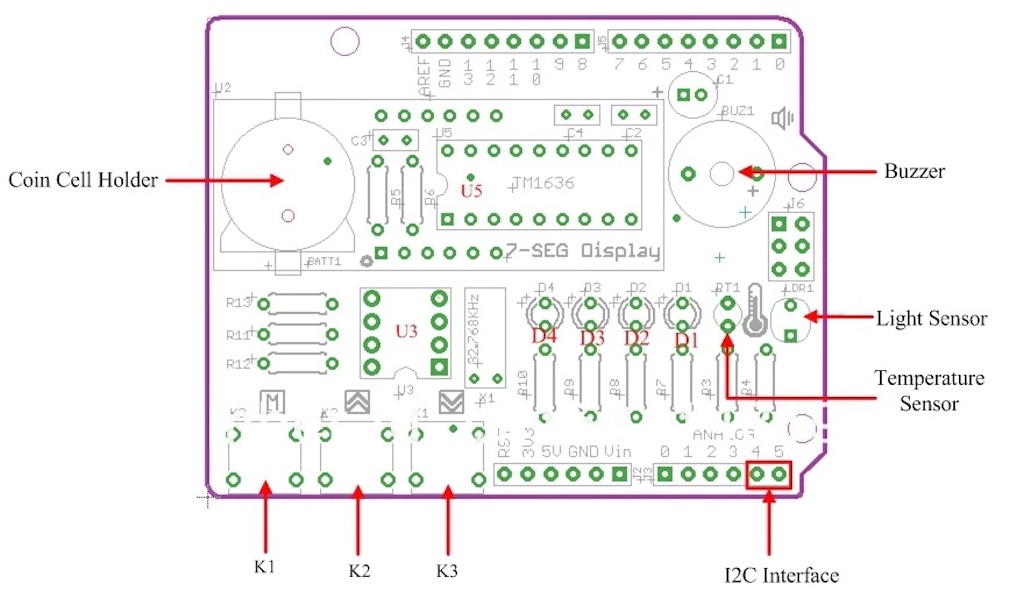 I have modified the Arduino libs which were provided as examples, calibrated the thermistors using some matrix methods for solving the Steinhart-Hart Equation (more on this later), and fixed a lot of errors (it was backwards before, getting brighter in the dark and less bright in strong light) in the sample code to control the display brightness, etc.

However, overall, this shield is fun to play with a a nice value for under $5. I'm happy to modify the sample lib code for this price!

Today, in this post I will share a quick Arduino sketch I used to set the RTC (lazy to reply on syncing with unix time on my computer) manually.

I think in a future post, I will explain in detail how to calibrate the thermistor, including what data to record, how to convert the calibration data so it is be used in an online "matrix solver" for Steinhart-Hart. Plus, I have a fun story how I "froze" the X1 crystal oscillator in the freezer and overheated (and temporarily killed) the board using a hairdryer for "hot" calibration data, but I did manage to get some good data, both frozen and fried

Also my new Rigol DS1054Z 4-channel oscilloscope arrived from China yesterday, in perfect working order, fully loaded with "all options" as a gift; so the "tick-tock shield" has taken a back seat to the DS1054Z, which I have to say is just an amazing o-scope for the money. It's easy to see why this has been the top selling scope for many years running. I'm still getting to know this scope and have only start testing..... 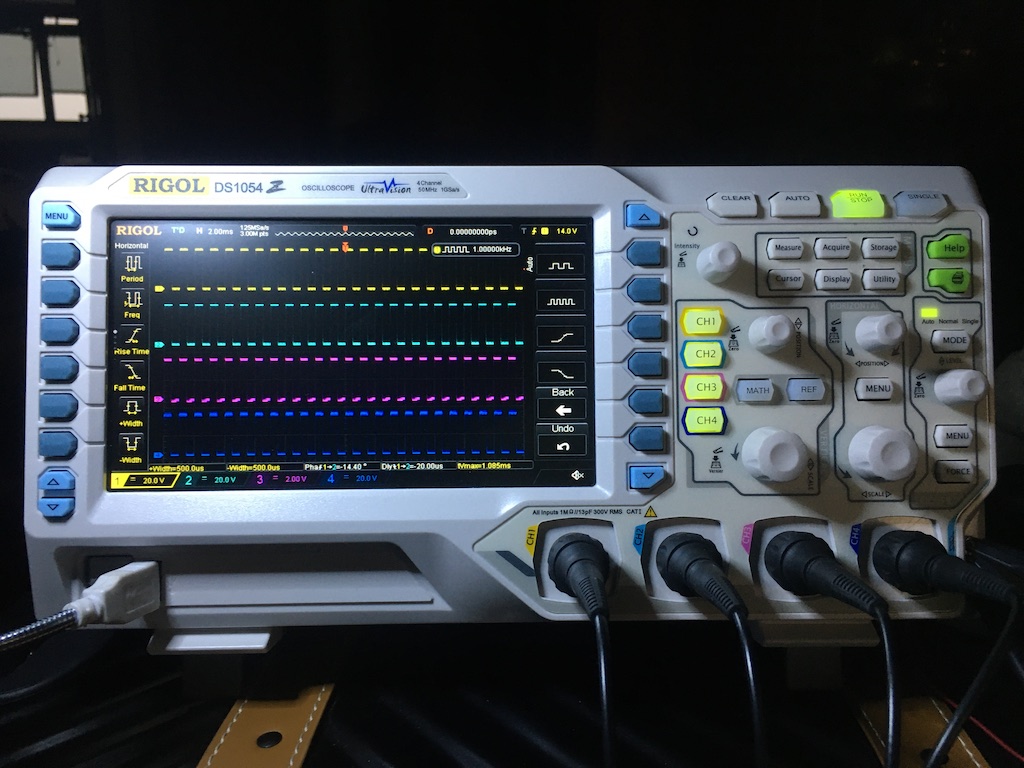 More on this later.

Most of you don't know this, but when I was working as a network engineer in the DC area in the US, I also had a side business buying and selling surplus electronic test equipment, mostly HP and WaveTek. That was a long time ago. Back then I had an HP Cesium Atomic Clock in my living room, which I eventually sold. Actually, I used to have test equipment stacked up to the ceiling, so it's really fun to see the great gear on the market in 2020, light, good, quality and very affordable. 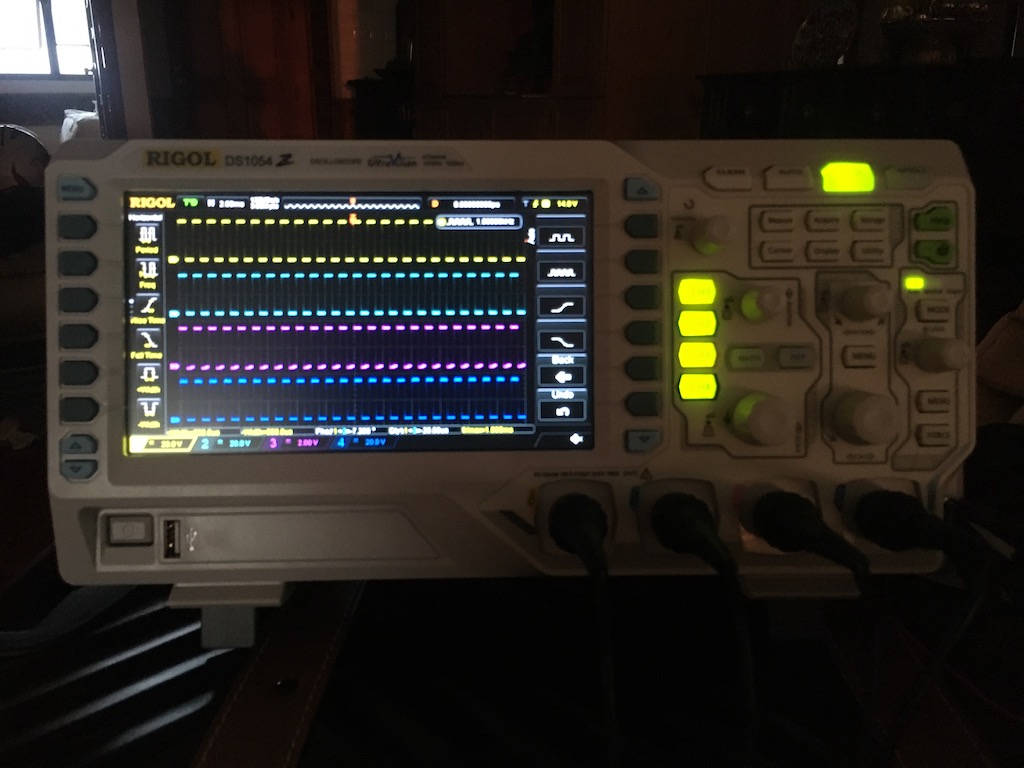 Join Date: Sep 2000
Last Activity: 22 January 2020, 11:36 AM EST
Location: Asia Pacific, Cyberspace, in the Dark Dystopia
Posts: 18,458
Thanks Given: 2,241
Thanked 3,028 Times in 1,680 Posts
This is my last update / post on this Arduino Tick Tock shield for now. I was going to post the details on how to calibrate the thermistor; including taking various measurements, recording the resistance at various temperatures, setting up the Steinhart-Hart Equation and solving it with matrix math, but I'm going to put that off for now.

Basically, this shield is a nice learning tool, with the real-time clock, thermistor, light sensor, display, buttons and LEDs to play with; but the RTC, the light sensor and the thermistor are of such low quality, that it's not really useful for anything more than "a toy shield" for learning and playing around.

The Ardunio Tick-Tock DS1307 RTC Shield was "fun" but not sure I recommend it to anyone, even for under $5 USD.

But on-the-other-hand, I did get my $5 worth playing with it so, as always, YMMV.

I am seeing a scenario where in if the TIMEZONE environment variable value is set to nothing i.e. putenv "TIMEZONE=" the hardware clock is +1 to software clock.Pasted below the results displayed: -> envShow (global environment) 0: TSC_TIME_FROM_RESET=420150.971529 seconds 1:... (0 Replies)

This is a strange one, I've never seen anything like it; the realtime clock doesn't tick while the computer's idle, only when you're watching it. Leave for 3 hours and it'll be 3 hours off. It still advances when it's off however, or the time would be far more incorrect than it is. About all... (10 Replies)

Hi, I'm administrating a pretty old solaris (2.6) system. In the cronjobs I found that every night 2 o'clock a cronjob starts /usr/sbin/rtc -c. I've never seen this app in my life before so I looked at the manpage and it told rtc is for syncing Dos and Unix Systems. Did I understand it correctly?... (2 Replies)